Whilst stripping down the front-end of the 944, my Dad noted that not once during his ownership had the front washer jets for the headlights worked. Being equipped with pop-ups, they attracted road grime like magnets, turning the lights into ineffective candles lighting the way.

During removal of the front bumper, it was noted that one of the soft-lines for the washer jets was blocked off with a bolt. Undoing this released the pressure in the system, and 15 year-old crud escaped through the one-way valve. 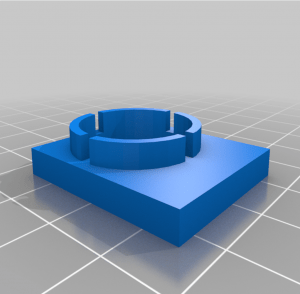 After taking apart all of the line and blowing them through (with the exception of some gentle poking with an awl at stuck valves), a new water pump was all that was needed to get the jets functional.

But there’s a big difference between functional and useful.

With one washer jet spraying more onto the bonnet than the headlight it meant a new one, which involves stripping down more of the bumper. Unfortunately, the mounting points for the headlight washers isn’t what I’d describe as being positive, and as such the securing nut had worked loose and required cutting off, damaging the locating plastic spacer in the process. The washer jets spacers aren’t available separate to a new washer assembly, however the other side was removed without damage, and this used as a basis for 3D modelling, and 3D printing.